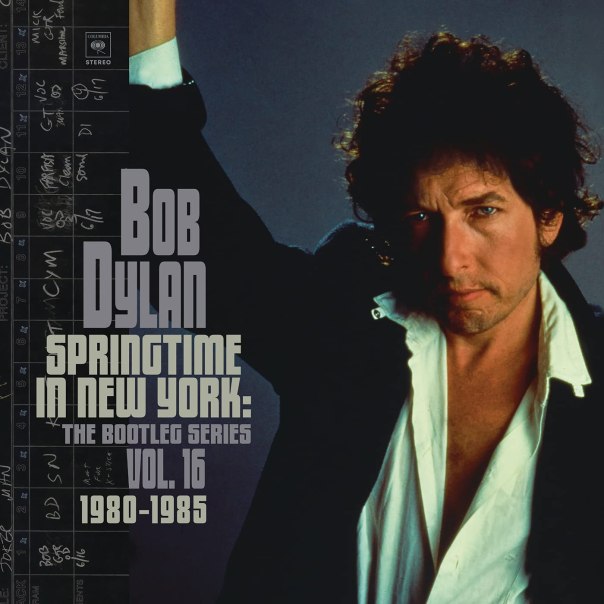 The latest chapter in Bob Dylan’s highly acclaimed Bootleg Series revisits an often-forgotten, rich vein in Dylan’s vast and complex catalog, shining fresh light on the provocative new musical directions Dylan was taking as a songwriter and a recording artist from 1980 through 1985.  In the early 1980s, while the music industry was grappling with the arrival of new trends and technology, from MTV to compact discs to digital recording, Bob Dylan was writing and recording new songs for a new decade, creating an essential new chapter in his studio catalog.  Bob Dylan – Springtime In New York (1980-1985) celebrates the rich creative period surrounding Dylan’s albums Shot Of Love, Infidels, and Empire Burlesque with previously unreleased outtakes, alternate takes, rehearsal recordings, live performances and more. The deluxe 5CD edition of the album presents 57 rare Bob Dylan recordings, 54 of them previously unreleased in any format, from 1980-1985.

In his liner notes for Bob Dylan – Springtime In New York, Damien Love writes, “And that’s the real story of this gloriously untrammeled collection. The songs. The songs stripped free of trappings, tampering, passing tastes, and judgments. The songs broken down to the sound of people really doing this, right now, acting on instinct. The songs rough and rowdy, bruised and tender, joking and crying, nagging and striving and yearning.  The songs were always there, and here they are still, keeping pace with us.”

The first release in 25 years from the fabled Postcard Records, “last of the punk independents.” Limited edition vinyl box set, in a hand-numbered edition of 300. Features: remastered pressings of the two original classic albums by the cult singer’s cult singer; a double LP featuring the Stupid Thing EP, unreleased tracks, and a wealth of live recordings; a 10″ EP featuring Quinn’s collaboration with The Nectarine No. 9, and a previously unreleased version of “Pale Blue Eyes” with Edwyn Collins; 144-page 12″ x 12″ hardback book, featuring a career retrospective text by Damien Love, and a plethora of unseen imagery from the Postcard vault.

Never before released: the original soundtrack from Robert Mitchum’s cult labour-of-love moonshiner movie of 1958, featuring the legendary Joe Maphis on guitar. The set also includes Mitchum’s famed recording of The Ballad Of Thunder Road, alongside other promotional singles recorded by co-star Keely Smith and soundtrack composer Jack Marshall, all in stunning remastered sound. The collection further unearths songs that were specially written for the movie in 1957 – but never used – by Randy Sparks of The New Christy Minstrels, plus the greatest cover versions of Mitchum’s cult title song, from western swing star Tex Williams to surf group The Super Stocks. 35 tracks in all, covering 1958-1974, plus a lavish 108-page booklet featuring many rare and previously unseen photos, and a detailed history of the making of the movie and its music by Damien Love.