The day is ending. Shadows spread across the meadows and creep through the graveyard, and in the twilight silence of the almost-empty country church, the man with the bad back is reflecting on mortality, and how, when Judgement Day comes, his own life might be weighed up in the heavenly scales.

“I’m quite nice,” he muses. “I’ve done some bad things. But I haven’t committed genocide, or anything like that.”

The speakers are Bob Mortimer and Paul Whitehouse, and they have just made the series to fill the Detectorists-shaped hole in my life.

Mortimer & Whitehouse: Gone Fishing – in which, excitingly, Mortimer and Whitehouse go fishing – has instantly established itself as the highlight of the television week. The regular opening montage, which features clips plucked from episodes to come across the series, promises that, at some point in the future, there will be choppy waters, with a very hairy-looking shot of the two of them out at sea on an alarmingly storm-tossed little vessel. So far, though, as they have planked themselves down on placid riverbanks and summery lakesides, the half-hour episodes have been little green oases in the schedules: quiet, glowing moments of Zen, albeit with a fair amount of snorting nonsense thrown in. 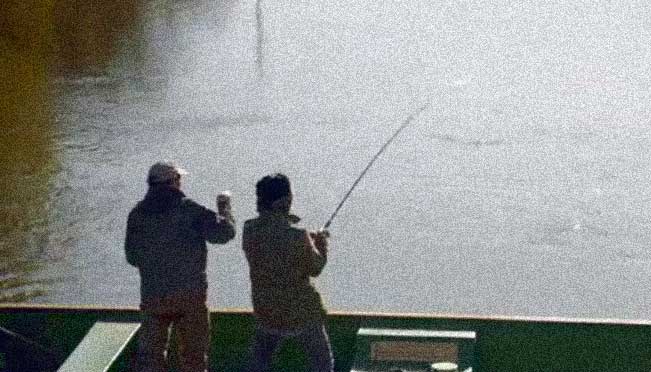 The programme has a rough reason for existing. The comedians, old pals, have both suffered serious heart disease: Whitehouse has had several stents put in, while, more recently, Mortimer underwent an unexpected triple bypass, an experience that knocked the wind from his sails. Proposed by Whitehouse, a keen angler, their catch-and-release tour around the UK is a form of therapy to help Mortimer’s recovery, and to help encourage him back to life, in all its daftness.

At first, all this feels more like an excuse for them doing a show than anything actually serious – a gentler version of the absurd celebrity angling of John Lurie’s cult 1990s series, Fishing With John. But as the series progresses, beneath the stuff with the pair acting stupid, talking bobbins, and falling over, that undercurrent grows stronger.

In this – the thoughts of mortality and time passing; the expression of friendship in the face of it; the sense of being alive and out in the world (not to mention the habit the two have of throwing in imitations) – the programme shares some things in common with Steve Coogan and Rob Brydon’s The Trip. But it comes at you without the weird fictionalised cover of that series, or the self-consciously operatic dimensions.

Whitehouse and Mortimer’s series instead has a handmade feel and a movingly human scale. It just ambles along, giving a good impression of making itself up as it goes, while pausing frequently simply to look at the landscape. The British countryside is so ridiculously lovely here that it has a near picture-book vibration and, doddling about with their little hats and rods and bulbous waders, Mortimer and Whitehouse, happy one minute, puzzled the next, could almost be figures made by the Trumpton team.

Mind you, it’s hard to imagine Brian Cant reading some of this dialogue:

“If I gave you the honour of providing the inscription on my gravestone, what would it be?” Whitehouse asks.

“I dunno,” Mortimer replies. “What would you put for me?”