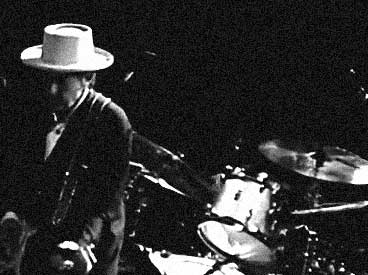 Back in 1991, as what we now call Gulf War I raged far away, Bob Dylan stood onstage at Glasgow’s SECC and unexpectedly pulled what must rank as one of the most shambolic concerts of his (or anyone’s) career out of the fire, via a howling, electric “Masters of War.” Sixteen years on, and performing with the sustained, growing focus and energy that has marked his concerts since the turn of the millennium, every other song seems a highlight. The two concerts couldn’t be more different – but he stops the room in its tracks once again by returning to another song he wrote about war in 1963.

Before that, though, the first big news about Dylan’s first UK show since 2005 is that he’s playing guitar again, for the first time since 2002. Stepping out in a black suit with white piping on the trousers and a flat, wide-brimmed hat, he looks like he was dressed in a happy collaboration between Zorro and Miami Steve, and as his five-man band careen into a rollicking “Cat’s in the Well,” he’s throwing shapes with his Stratocaster to fit the look. We get four songs with the guitar, including a blues-reverie “Just Like Tomb Thumb’s Blues” and a newly reworked “It’s Alright, Ma,” words falling like precise little dagger-jabs, hounded by Donnie Heron’s dark, Desire-esque violin wails.

Dylan switches back to keyboards for “The Levee’s Gonna Break,” the first of six Modern Times numbers, and a revelation. Never one of the big songs on the recent album, it comes alive in a new way. Dylan absolutely whips the thing till it buzzes and stings. As further demonstrated by a coruscating “Rollin’ and Tumblin’, ” he seems energised by the new material. He’s playful enough to build a small pantomime inside “Spirit on the Water,” bending the line “You think I’m over the hill,” into a question mark, then pausing for the audience to scream back: “Nooooooooooooooooooo!” But there’s no joking on “Ain’t Talking,” a scintillating, urgent reading that finds a dark, arcane and spine-chilling groove inside the song, the floor of the SECC turned into a kind of haunted disco.

If Dylan was throwing shapes before, he’s positively vamping now, jerking, jiggling, twisting and grinding around his keyboard as if he was plugged into it. He’s ditched the warm piano sound of 2004  for a weird, high-pitched organ reminiscent of ‘60s garage bands and fairground carousels. When it works, as on an intensely beautifully reworked “A Hard Rain’s A-Gonna Fall,” it lends a floating, dream-like cast. At other times he comes close to playing an entirely different song from anyone else onstage.

That, though, is part of what keeps Dylan’s shows so vital: rough, bleeding edges and moments of confusion and uncertainty are still allowed. Unbelievably, the biggest stumble comes on the song he must have played more than any other, “Like a Rolling Stone,” which takes an age to coalesce into any recognisable shape.

But what will linger in the audience’s minds is that moment in the dead centre of the night, when Dylan pulled out one of his oldest, perhaps least-known songs. A spooked martial shuffle, a plucked banjo ringing out like the sound of very desolation, it’s “John Brown,” a blunt, plain sing-song about a boy who went off to war straight and tall in his uniform, and how his mother was proud – until he came home and she met him off the train to find “his face was all shot up and his hand was all blown off and he wore a metal brace around his waist.”

Fresh from seeing the latest flag-draped coffins on the evening news, the audience seems mesmerised, hanging on every simple word, feeling years and wars blur together and hold hands, realising it’s the same man up there today who was singing about this back then. The effect is truly uncanny. Eerie, even. Nothing to do with “protest songs” or “the voice of a generation,” but conjuring up something older and stranger – the stuff he’s been dealing in all night, all his life.