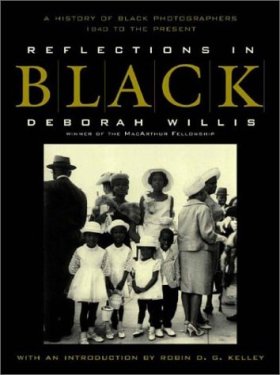 Reflections in Black: A History of Black Photographers 1840 to the Present
By Deborah Willis
Norton

Writing in 1849, sixteen years before slavery was abolished in the United States, the great black orator and civil rights champion Frederick Douglass, himself a former slave, commented upon how “Negroes can never have impartial portraits at the hands of white artists…”

At the time Douglass was writing, every popular representation of black men and women produced by the dominant culture constituted a deliberate distortion. This is hardly surprising: this was a period, after all, when the rape of a female slave could be considered as a criminal offence only when it was seen to constitute as trespassing on another white man’s property; and when, in 1857, the US Supreme Court could constitutionally sanction racism in the decision of the “Dred Scott v. Sandford” case, finding that black Americans, whether free or slave, were not intended to be included under the term “citizen” as employed in the Declaration of Independence.

“It seems to us next to impossible,” Douglass continued, “for white men to take likenesses of black men.”

Whether employed in advertising, packaging, song sheets, postcards, or supposed documentary, depictions of black figures in those times were pictures of happy-go-lucky minstrels with lazy grins, tattered trousers and hats of straw; either these, or of alien Others, savage and threatening, crawled from the dark subconscious continent of the world; either these, or of the noble primitive, a particularly pernicious category.

All amounted to a form of negatively charged white supremacist propaganda, so pervasive as to be practically, if never completely, unconscious. Over 100 years after Douglass was writing, Ralph Ellison, in his 1952 novel The Invisible Man, located the accumulated weight of all that image-history – the weight of social, political, economic and educational disenfranchisement; the weight of lynchings – still pressing down between the shoulder blades of a single, imploding, individual.

Sidney Poitier and Harry Belafonte were just stepping up at this stage, and there had been a few, fugitive, examples of what looked like real, honest black life sketched on the far edges of the cinema screen before them, if you dug deep. But, by this stage, Amos ‘n’ Andy (aka white performers Freeman F Godsen and Charles J Correll) had drawled across the airwaves nightly in the homes of millions, to become the most famous radio personalities of the 1920s and early 1930s, and Hollywood had called upon them and other white comedians in blackface to replicate the act onscreen. Most black actors, meanwhile, were still struggling through the wake Stepin Fetchit and his imitators had left as they were employed to shamble and stutter across the cinema screen.

Boiled down, one of the themes of The Invisible Man was of a black man’s search for identity in a world where images such as these were practically the only images the prevailing mirror of culture presented to him; where his own individuality went unrecognized, and the only roles available for him were those limited, limiting few designated for him by white society.

Beneath these fabrications, though, lay buried a whole other, secret gallery of real black imagery, a scattered, underground one, whose exhibits offered sharp fragments from America’s hidden history, laying out the proof rumbling beneath a statement from Ellison’s mentor, novelist Richard Wright: “Our history is far stranger than you suspect, and we are not what we seem.”

This was the work of America’s black photographers, the first of whom began operating as early as 1840, one year after the invention of photography itself, and twenty-five years before slavery was abolished. Documenting their communities in studios, in pictures made in the home, and later out in the fields and in the streets, these early artists captured a life that was obscured and denied by the dominating American culture.

An instrument of democracy, the camera could take your portrait when you could not afford to commission a painter with oils, and could produce images that you could read even if you had never learned how to read. In her 1994 essay In Our Glory: Photography and Black Life, the African-American critic bell hooks nailed down the importance of this documentation:

“The camera was the central instrument by which black folks could disprove representations of us created by white folks… For black folks, the camera provided a means to document a reality that could, if necessary, be packed, stored, moved from place to place. It was documentation that could be shared, passed around. And ultimately, these images, the worlds they recorded, could be hidden, to be discovered at another time…”

The opportunity to make the discovery that hooks wrote of has now been presented in Reflections in Black, a stunning book put together by Deborah Willis, collecting together around 600 images created by black American photographers from 1840 to 2000. A history in pictures worth a few hundred million words, Willis’s collection lays out the true inner life of Black America over a period of 160 years.

The harsh realities of slavery, the inspirational likenesses of black leaders and, vitally, the prosaic reality of everyday black existence all passed before these photographers’ camera lenses, to be saved as proof. And in some respects, it might be that the most seemingly mundane photographs here  are the most important: records of the ordinary dignities of daily life, the loving and laughing, the tears and little successes – a couple on their wedding day; a class of typists; a young woman clutching her graduation scroll; a baby sitting alert in a wicker stroller with shiny wheels, watching the photographer’s birdy; a woman dressed in mourning.

A 1932 image by the famous portraitist James VanDerZee, of a pristine couple dressed in ankle-length fur coats, the man sat inside a gleaming Cadillac, tells repressed stories to the viewer, both about an unspoken, unexpected aspect of Harlem at the onslaught of the Depression, and about the migration from the rural South to the North and the possibilities lying there.

Before he went on to become a film director, stuffing the sidelines of his movie Shaft with the life of the different Harlem of 1971, Gordon Parks was the first black photographer on the staff of Life magazine. His 1942 picture of charwoman Ella Watson, resting with her family in her tiny flat between working her fingers to the bone in the government offices of Washington, tells another buried story, about the discrimination still haunting the nation’s capital city.

By far the most famous photographs in the book are those taken during the Civil Rights movement’s most highly visible period of activity, across the 1960s. Even here, though, among the images of marches and speeches, gathering and boycotts, and the front line shots from the riot-torn streets of Watts in the Los Angeles of 1965, there are pictures that are revelatory due to the fact that they have been made, as it were, from the inside of the struggle, away from the front pages: Moneta Sleet Jr’s photograph of Coretta Scott King cradling her daughter during her husband’s funeral might be an iconic image, but the moment it holds depicts a woman who could be any woman.

Similarly, Robert L Haggins’s intimate portrait of Malcolm X holding his daughters close in the back garden of his house in Queens, is removed from the political frame. Just a father murmuring.

This photograph by Haggins echoes against another in the book, Arthur Bedou’s 1915 portrait of the educator and speaker Booker T Washington, astride his horse in the last year of his life. Washington, often castigated as “the great accommodator,” is a controversial a figure in Black American history. Politically, he occupied a position almost diametrically opposed to Malcolm X’s. For him, the opportunity for African Americans to earn a living and acquire property was more important than the right to vote, his philosophy being that blacks should not campaign for civil rights and that they should prove their loyalty to the United States by working hard without complaint before being granted such rights. Nevertheless his Tuskegee educational institute played an important role in the path to emancipation. Between Bedou’s picture, and Haggins’s hangs a world. Above all, however, both photographs show each man as a man – at home, at rest, in his own reality.

In 1843, less than four years after the first photograph was made in France, the poet Elizabeth Barrett wrote about the magical presence of these new pictures, about “the association and the sense of nearness involved in the thing,” about “the fact of the very shadow of the person lying there fixed forever…”

More than anything, it is this quality that gives these photographs their special power: that they present a fixed, concrete record for all time – defiant little messages in bottles, thrown out into a prevailing, stormy ocean of imagery and history. Ella Watson, that nameless couple in their raccoon coats, Booker T Washington,  Malcolm X: all of them people in the light, all of them visible, and all kept visible.