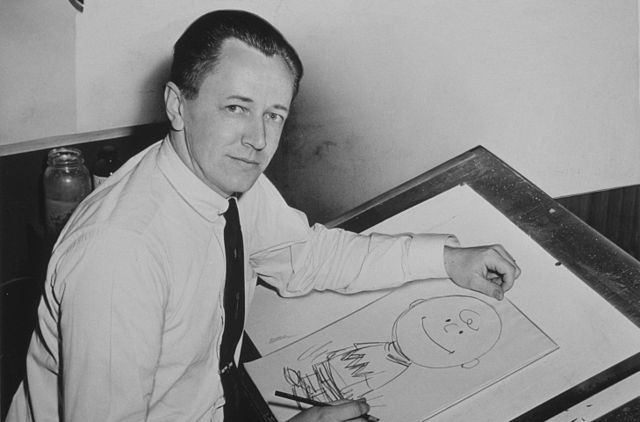 CHARLES SCHULZ GAVE HIS LAST  interview late in December 1999. He had announced his retirement the week before, and, always on a deadline, had already drawn what he knew would be the final Peanuts strips; one last small daily, scheduled to be published on January 3 2000, and then a concluding Sunday colour strip, to run February 13.

Schulz was retiring at 77 because illness had left him unable to meet the demands of a daily strip. He had been told he had colon cancer and it had metastasized to his stomach. He publicly announced he was planning to devote time to seeking treatment, but he privately knew he didn’t have much time left. In that last interview, filmed for America’s Today programme, he recalls signing his name to the final panel, and realising that, after 50 years and 17,897 strips, that last pen stroke really marked the end of the line for Charlie Brown.

“And all of a sudden,” he said, “I thought: You know, that poor kid, he never even got to kick the football. What a dirty trick.”

Of course, we wouldn’t have wanted it – and he probably couldn’t have drawn it – any other way. Charlie Brown was born to lose. He would never get to kick the ball Lucy Van Pelt held for him, just as he would never pluck up the courage to talk to that Little Red-Haired Girl, just as black-haired, black-hearted Lucy herself would never win Schroeder away from eternal, fanatical practice on his toy piano.

By the time of Schulz’s death, Peanuts had grown into a $1.2 billion dollar industry that earned him a reputed $40 million a year. Syndicated in some 2,600 newspapers around the world, it had a daily readership of over 355 million people.

Neither that success, however, nor the ubiquity of the warmest, fuzziest, happiness-is-a-warm-puppy-est aspects of the strip, endlessly replicated in merchandising and licensing spin-offs since it became a global phenomenon in the 1960s, should obscure the fundamental, paradoxical truth: that the most popular comic strip in the world was a deeply personal work, about the interior torments of people who, like its artist, never felt popular, felt out of place in the world.

Schulz conceived, lettered and drew every single one of those 17,897 strips alone. By the late 1980s, following heart trouble, his hand developed a tremble that began increasingly to show in his once perfectly bold lines. By the late-1990s, when he was plagued by failing eyesight and hit by a series of small strokes, those lines grew shakier still. Yet this never detracted from the strip, only deepened it. Schulz made that shaking line part of the aesthetic of Peanuts, so you hardly noticed it. If you were aware of it, and the reasons behind it, what it said about one man working away on his own for half a century, it added immeasurable poignancy. Extraordinarily, Schulz died on the night of February 12, 2000: just a few hours before the last ever strip appeared –Snoopy sitting atop his doghouse with his trusty typewriter, tapping out Schulz’s farewell to his readers. When the strip stopped, so did he.

FIRST PUBLISHED IN OCTOBER 1950, Peanuts appeared against the backdrop of America’s first, most feverishly optimistic flush of consumerism. The joke was an old one in newspaper cartoons: the button-eyed kids had adult thoughts and feelings rolling around their big round heads. But what made Schulz’s creation stand out – in addition to his audaciously modern, minimal draughtsmanship – was the nature of those thoughts and feelings, how he tapped into the unmentionable neuroses hidden away out of sight behind the period’s bright white-picket-fence veneer.

Long before the underground comics of the late-1960s, the radical, hung-up hippy creations epitomised by Robert Crumb, Schulz seemed to speak out for society’s losers and misfits. Schulz smuggled the term “depression” into the funny pages. He gave the phrase “security blanket” to the world, but only because insecurity –along with rejection, disappointment, melancholy, loneliness, self-consciousness, paranoia and unrequited longing – was his great theme.

It was there from the start. For a long time, Schulz was squeamish about reprinting the earliest Peanuts, because he felt they didn’t reflect the nature of the strip as he ultimately developed it. A few years before his death, however, the American comic book publisher Fantagraphic began discussions with him for The Complete Peanuts, a heroic project to reprint the entire run in a chronological sequence of books. Beautifully designed by the cartoonist known as Seth, the first two volumes, covering 1950 – 1954, appeared in the States in 2004. This month, courtesy of Edinburgh publisher Cannongate, they are reprinted in UK editions.

At first glance, you can see why Schulz might have felt these early outings were unrepresentative. What strikes you most about Peanuts in its first years is how unlike Peanuts it is. Charlie and the gang actually look babyish, unfinished. Familiar faces are absent –Linus, Sally, Pig-Pen, Peppermint Patty – still unborn or yet to move to the neighbourhood. Lucy isn’t the whirlwind harridan curmudgeon she would become. She’s just a younger neighbourhood kid Charlie sometimes baby-sits.

Most strikingly, Snoopy, the beagle who would come to almost steal the strip from his master and emerge as the most sophisticated and grownup member of the cast, is still mostly just a doglike dog, still walking on all fours, cut off from the vibrant Walter Mitty-esque fantasies that would make him a superstar from the early-1960s on.

(Meanwhile, Schulz still hasn’t refined his abstract, flatland style. You actually see Snoopy’s doghouse drawn in perspective, making clear the impossibility of his famous later pose, sitting on the peak of its pitched roof with his typewriter).

Look again, though, and familiar motifs begin to emerge. Silent Snoopy suddenly thinks a first thought in 1951. Little Lucy whisks her first ball away in 1952. And there, shimmering in the infinite white spaces of the very first Peanuts strip, published October 2 1950, loom all the premonitions of angst to come. Charlie Brown, all alone, walks past a boy and a girl sitting on a step. As they watch him approach and pass, the boy says: “Well! Here comes Ol’ Charlie Brown. Good Ol’ Charlie Brown…Yes, sir! Good Ol’ Charlie Brown…How I hate him!”

PEANUTS HAS BEEN IN THE POP-CULTURAL BLOODSTREAM for so long that it’s hard to imagine there was a time when it wasn’t. But Schulz suddenly seems to be in the air again. The publication of The Complete Peanuts in the UK coincides with the appearance of a thoroughgoing new biography, Schulz and Peanuts, by David Michaelis, that has been the subject of some controversy in the US.

Schulz gave hundreds of interviews across his life, and the outline of the story Michaelis tells will be familiar to fans. He was born in Minneapolis in 1922, the only child of a Norwegian mother and a German father, who, like Charlie Brown’s unseen dad, was a barber. Prophetically nicknamed Sparky – after a racehorse in the popular 1920s comic strip Barney Google – he grew increasingly awkward as he entered his teenage years, but he loved to draw, and his mother encouraged him in that retreat.

She died of cancer in 1943 when he was 21 and literally on the eve of going to war, and he never got over the loss. He saw active combat and was close by when Dachau was liberated. He never went to Art school, but learned his craft via a correspondence course, and later became an instructor for the same learn-by-mail school. He named his characters after co-workers he encountered: there was a real Charlie Brown; there was a Linus; and there was a girl with red hair called Donna Johnson whom Schulz wanted to marry, but who turned him down and married a fireman. He never forgot the rejection.

What has raised eyebrows in the States, however, is Michaelis’s portrait of Schulz as fundamentally unhappy, a cranky, reserved individual, plagued by anxieties, given to holding grudges and dwelling on perceived slights for decades, then regurgitating them in his strip.

What might raise eyebrows among Peanuts fans, though, is how many commentators and reviewers have reacted to the biography as though this was some great revelation, the cracking of a secret code. Did they ever read Peanuts in the first place, or are they basing their knowledge on the drawings of Snoopy and Woodstock dancing happily on their pencil cases? Look back at the time where Charlie Brown goes to summer camp and spends the entire trip with a paper bag over his head. Now, seriously: can the idea that Schulz was a somewhat depressed guy who found it hard to relate to other people and was often difficult to get along with really come as news?

The Peanuts gang always looked cute, but a current of anxiety and discontent crackled through their comfy backyard universe like a jagged black zigzag ripping across a sunshine-yellow t-shirt. Umberto Eco, in his famous essay on Peanuts, put it this way: “These children…are the monstrous, infantile reductions of all the neuroses of a modern citizen of the industrial civilisation.” There have been countless Peanuts parodies, both by comic book artists who love and profess to loathe Schulz’s work, but the most brilliantly acute pastiche of all was drawn by Robert Sikoryak in 1990: Good Ol’ Gregor Brown, a retelling of Kafka’s Metamorphosis, Charlie Brown waking to discover he’d turned into a cockroach.

The very title of his strip was a flag of defeat. His syndicate forced the enigmatic “Peanuts” on Schulz, and he slunk along loathing it for the rest of his career. “Good grief” is Charlie Brown’s most famous catchphrase, but two others phrases repeat far more often: “I CAN’T STAND IT!” and that perfect expression of the inexpressible, “*Sigh.*”

Writing in 1985, Schulz himself highlighted the bleak melancholy that was Peanuts’s bedrock: “All the loves in the strip are unrequited; all the baseball games are lost; all the test scores are D-minuses; The Great Pumpkin never comes; and the football is always pulled away.”

Schulz’s family, who granted full access to Michaelis, feel betrayed by his book, and have protested vociferously that the warm, loving, open and extremely generous side of the man they knew (Schulz gave away literally millions of dollars to various causes, often without credit) has been largely airbrushed out of his biography, so as to not to spoil the picture of a tortured artist Michaelis had already decided he wanted to paint. And Schulz’s family are probably right.

While it’s the melancholy that lingers, Peanuts could not have survived 50 years, nor become so beloved, if Schulz did not also have a deep sense of fun and humanity. He is unsentimental and sarcastic in Peanuts, but he is never cold and mean. He depicts losing as the universal condition. If he says that we’re all ultimately alone, he also says that at least we’re all in it together. Schulz’s characters, named after friends, but really facets of himself, were baffled by life’s constant disappointments, cruelties and absurdities, but never fully defeated. The sad cosmic joke might be that Charlie Brown never gets to kick the ball. But the really funny thing is, he never stops trying.