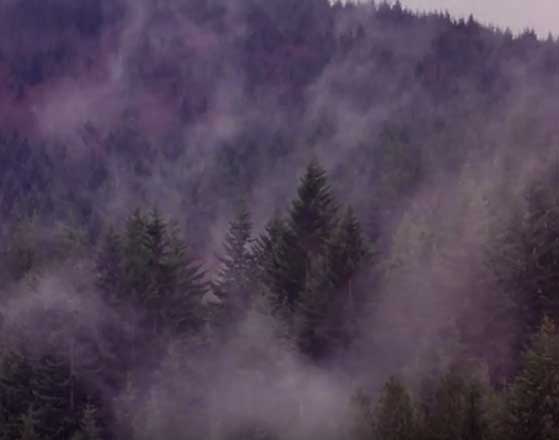 This story appeared in The Scotsman, November 30 2001

A FAR-OFF SMALLTOWN. The heavy branches of an ocean of trees, swaying pale green in dim daylight. A lonesome foghorn across the lake. A dead girl, washed up in the morning, wrapped in plastic, lips turned blue. Her Prom-Queen portrait bright in the high school trophy cabinet. A policeman who cries like Stan Laurel. The lights in the morgue sputtering. A tiny scrap of paper beneath her fingernail. Her mother’s screams. Her grieving father, clicking his fingers to Glenn Miller. A sweater girl dancing by herself in a diner. Sultry cartoon jazz. Coffee, hot and black. Cherry pies. Chocolate bunnies. A woman in an eye-patch, obsessed with her curtain rail. A stag’s head on a table. A llama. Cocaine. A fish in the coffee. Wayward teens, barking in jail. A lady with a log. Logging trucks rolling always out of sight. The trees again. A burned out train-wreck, miles from town. A traumatised girl, what’s left of her clothes in grimy tatters, crossing a lonely bridge, dwarfed by the girders. The unconcerned mountains. Torchlight in a forest at midnight. A dwarf in a red suit, dancing in a room of red velvet curtains. A solitary traffic light at night, suspended over a deserted intersection, buffeted  by the wind, changing to red against a pitch black sky.

It gets harder to believe television was ever like this, but Twin Peaks is coming back this weekend to prove it existed after all, claiming the fag end of Saturday night as Channel 5 screen the programme’s first five episodes back-to-back. Savour it, because it’s unlikely we’ll see its like again.*

Since the programme, with its tale of the near-mystical FBI Agent Dale Cooper’s investigation into the dark circumstances surrounding young Laura Palmer’s murder, ended, its influence has been obvious. Diluted and degenerating echoes have sounded through The X-Files, American Gothic, Buffy, Northern Exposure and Due South. Some of Twin Peaks‘ structuring principles even resonate in David Chase’s organising of The Sopranos: the input of a variety of writers and directors, closely monitored by a guiding central imagination, filtering out false notes. (And then there’s the way the programme is about “a darkness in the woods” – watching how Lynch sets a stumbling hand-held camera sprinting in terror through the forest at night, it’s difficult not to see the seeds of The Blair Witch Project.)

Still, for all that, there has been nothing like it since. Mixing soap opera, cop show, murder mystery and highschool shennanigans with a heady dose of film noir and an indefinable,  increasingly potent dash of the uncanny, Twin Peaks represents the opposite of what today’s programme-makers generally seem to imagine we want. It was Sur-reality TV. It didn’t underestimate its audience. It was a deeply textured tone poem, a stew of pop history, various mythologies, high art and low culture, balanced on a knife’s edge between parody and ingenuousness. It followed nothing but its own arcane logic and it took the time to have its characters stop their sundry schemes and investigations to do startling things like rhapsodise over good food, the smell of the air, or the feeling of urinating in the woods. And, against all the odds, for a short while it was about the most popular thing in the world.

It’s been eleven years since the show debuted in the UK. Twin Peaks went up like a strange bottle-rocket, then it fizzed away. By the time it reached Britain, in the November of 1990, Lynch’s programme, co-created with former Hill Street Blues writer Mark Frost, was already a sensation, and on its way to becoming a world-wide phenomenon. When it first went out over the ABC network in the States, in April 1990, the show regularly pulled in an audience of around twenty million; one third of all the TV sets in America were tuned in. Here, over 8 million viewers watched the initial episodes, some of the biggest audiences BBC2 had ever seen. In Japan, the show became a national mania (with their teens and psychics and supernature, the Japanese psycho-horror movie genre, particularly the Ring films, also owe a debt).

In the same way that it’s hard to believe his programme ever existed, it’s difficult to believe the director of Eraserhead (1977) ever came to TV in the first place. There’s a noteable precedent: in 1955, Alfred Hitchcock moved to the small screen with his anthology show, Alfred Hitchcock Presents. In the main, Hitchcock acted only as the host of that undertaking, a kind of reassuring brand presence, but he did also direct some seventeen episodes, most devoted to taking a skewed look at dark deeds behind the facade of small town America in a proto-Peaksian way: a pregnant Barbara Bel Geddes beats her husband to death with a frozen leg of lamb.

Hitchcock was persuaded into TV by his agent, as was Lynch, hot after his breakthrough movie, Blue Velvet (1986), the film in which Dennis Hopper sucked gas and wanted to play baby, and the first time Lynch had peeled back the flesh of a small American town’s pallid underbelly, a place that, like Twin Peaks, seemed to exist simultaneously in the present day and the late 1940s. (Blue Velvet ended with a bird in a tree – the same image Twin Peaks opened with every week in its heavenly titles montage.)

Lynch was drawn to TV because he was intrigued by the notion of never having to say goodbye, of creating an ongoing, endlessly unfolding story – you can see that same desire itching earlier in the wonderfully cheesy and, in accumulation, oddly terrifying newspaper cartoon strip he drew every week for The LA Reader between 1983 and 1992, The Angriest Dog in the World. What he aimed at creating was less a TV series than an environment, a place you looked forward to going every week.

Then, a year later, it was over. ABC, initially wildly enthusiastic, but increasingly nervy about such an unclassifiable show, began tinkering, and demanded  the identity of Laura Palmer’s killer be revealed far earlier than Lynch ever intended. (He obliged by directing an episode featuring the most brutal murder to have been broadcast on primetime American network TV.) He left for a while to concentrate on Wild At Heart (1990) and, in his absence, the show, though never less than entertaining, began to meander. The genuinely eerie faded, to be replaced by the merely oddball, a squarer kind of weird. Then the Gulf War grabbed attentions, and ABC started moving the show’s timeslot around, from Thursdays to Saturdays.

American viewing figures had dropped to a less than a quarter of what they once were and ABC cancelled Twin Peaks at the end of its second season. Returning, Lynch directed a final episode that was like a radical slap in the face, one that conclusively pulled the show back onto his own rail. Around the same time, Lynch and Frost’s other show, On the Air – a truly demented little sitcom, set around a Manhattan TV studio in a dayglo 1957, which, at the last count, about 120 people in the world besides me found funny – was chopped off at the neck by ABC, too. Lynch swore he’d never work in TV again.

Hitchcock put his TV experience to use in 1960 when he shot Psycho with his television crew, under similar constraints of time and budget, discovering a hard new gothic-modernist brutality in the process. Lynch, too, was affected by his small screen sojourn. Unable to leave the place he’d created, he made his movie Twin Peaks: Fire Walk With Me (1992) a prequel to the series which, initially maligned (perhaps because it mostly dispensed with the show’s humour, except for an utterly beguiling prologue), has since revealed itself to repay repeated viewing,  setting out to more centrally frame the story of abuse at the project’s heart.

His next two movies, Lost Highway (1996) and The Straight Story (1999) were like Twin Peaks split in two: the former, a fast, loud, literally psychotic film, found an America full of festering sores and rupturing reality; the latter was a slow, hushed, folksy masterpiece of sensual humanism, celebrating all that’s right in the world.

The most unlikely echo of Twin Peaks, though, came last year when, despite all his experiences with ABC, David Lynch went back to them to shoot the pilot for a new TV series, Mulholland Drive. Another noir-soap, the show was to resemble a melding of Twin Peaks and Lost Highway, saturated in place, with the haunted Los Angeles as much a character as the little town with its ghoul-haunted woodlands had been in the earlier series. There were to be similar tricks of texture, too: where Twin Peaks had a hidden West Side Story reunion in the casting of Richard Beymer and Russ Tamblyn, and the passing likes of Jane Greer – once the almond-eyed girl who led Robert Mitchum to ruin in Out of the Past (1947) –  Mulholland Drive had Ann Miller who, over half a century beofre, stole On the Town (1949) from Gene Kelly and Frank Sinatra as a tap-dancing anthropologist dressed in green.

This time, ABC went from wildly enthusiastic to nervy in record-breaking time, cancelling the show even before its pilot aired. From the ashes of the tube, though, Lynch raised a phoenix – his seductive new movie, Mulholland Dr., which has garnered some of the most glowing American reviews of his career, is a salvaged, reworked and reshot version of the Mulholland Drive pilot.

Mulholland Dr will hit the UK soon. In the meantime, though, come these Twin Peaks repeats. This weekend’s opening dead-hours marathon will last just over five hours, but it will feel simultaneously far shorter and far, far longer.

One of the most radical things about the programme was how it burst apart conventional rules of TV pacing, entering a mesmeric trance time, stretching out the minutes until the show ended…far too soon. Consider this scene from the final episode: the static camera just sits and watches a very old man wander very slowly away on bandy legs, up the long length of a room to fetch a cup of water, then wander all the way back down again, to give the drink to a girl (herself chained to the bank vault, for reasons too knotty to get into, involving pine weasels). Then, he wanders back again, to put the cup back where it belongs. And then he wanders halfway back down,  pauses, and takes a few steps back, then forward again, not knowing quite what to do.

Mesmeric, paced like a painting: Magritte, Norman Rockwell and Edward Hopper, decorating Peyton Place and the Happy Days diner under the direction of Poe. Make the most of these repeats. David Lynch has sworn he will never work in TV again. Again.